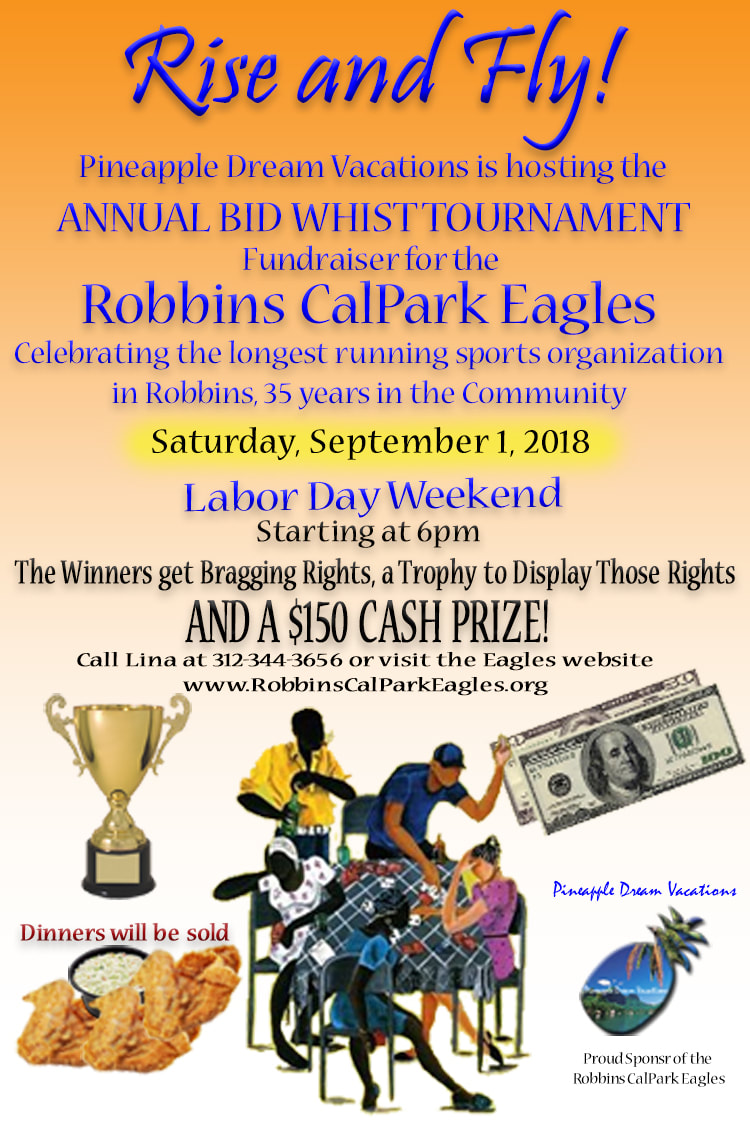 Come show them off at the Eagles 1st Annual Bid Whist Fundraiser Tournament!
Saturday, September 1st at the basketball court next to the Robbins Community Center, 13800 Trumbull Ave in Robbins, IL 60472

OVERVIEW
The tournament format is single elimination team contest, each person will get to deal one hand, a fifth hand will be dealt in the event of a tie-breaker to determine a winner. If the score is tied at the end of four hands, a one- hand tie breaker will determine the winner, first diamond deals.

GENERAL RULES
Both partners must be present to be seated in the tournament after the start time is announced there will be a five minute grace period granted before forfeiture of game. During actual play, if there is a discrepancy that cannot be resolved by the teams, raise your hand for a monitor, keeping in mind the monitors’ ruling is final. All hands must be played out, no throwing in hands after bid has been made or not made.

THE DEAL
Shuffle, cut and deal for the first diamond. The dealer will shuffle the cards (face down), pass them to the right to be cut, at least once and no more than twice and deal clockwise. The first four cards and the last four cards must go around the table. There is NO ‘sporting’ the kitty.

BIDDING
Bidding will be progressive (a low bid will not take out a high bid).The only acceptable bids are as follows: NO HALF-STEPPING - if the first bid is a 4 HIGH, the next bid has to be a 4 NO or next number up, to take that bid out; a 4 LOW will not take out a 4 HIGH. If the first bidder bids 7 No in a game, there is no need to wait for the other bidders to say ‘pass’ before calling a direction. If a player wins a ‘NO’ bid and inadvertently forgets to call the direction, the bid is automatically HIGH.

RENEGE
A renege is an infraction that results in the loss of the game, NOT forfeiture of 3 books. If a team calls renege on the opposing team and they are wrong that will result in the loss of the game. A team cannot call a renege on themselves. The following are ‘SOME’ examples of what constitutes a renege:
If a player fails to follow suit when they have that suit in hand.
If a player bids a lower bid or the same bid as the previous bidder.
If a player does not discard their joker properly
If a player bids out of turn and there is a ‘legal’ bid on the board, the team that did not commit the infraction has the option to take the points of that legal bid or ‘play on’. Playing on may give you more points in the event you are behind in the score.

MISDEALS
It is considered a misdeal if any of the following occurs: (1) If a player deals out of turn. (2) When the cards are not equally distributed. If either of the aforementioned occurs the correct dealer deals again, the deal does not travel.

JOKERS
Jokers are winning trump cards except during a NO-Trump bid. Jokers MUST be discarded immediately after a suit can no longer be followed.

BOOKS
Books will be chain-stacked by either partner to prove or disprove infractions. Bidder keeps their kitty. If a player calls a renege based on a player not following suit, the accuser only has to describe the infraction NOT point out the specific book. For example, “You cut my ace of spades with the three of diamonds and you just played the king of spades”. All books may be turned over to prove or disprove the accusation.

CHEATING
ZERO TOLERANCE Unnecessary body motions, gestures, hand and eye signals or ” punctuated” play like slapping cards to indicate a comeback suit will not be tolerated. Trash talking is allowed, talking across the board is NOT, if you don’t know the difference, ‘quiet always works’. ANY CHEATING WILL DISQUALIFY A TEAM FROM THE GAME.

If you have any questions regarding these rules, please bring them to the attention of the tournament coordinators.
Click to set custom HTML

708.629.6640 phone / robbinscalparkeagles@yahoo.com
*All registration fees are non-refundable. Refunds are only given if there is no team for the registered player
Copyright © 2018  Robbins CalPark Eagles Youth Football & Cheer Association  All Rights Reserved.
Website by LINA Business Services